Scaffoldings are something that you see all over the world. While many cities are experiencing a construction boom, we can this mixture of tubes and platforms making their way up buildings all over the place. From New York City in America to Mumbai in India to Shanghai in China, buildings in construction need the help these structures provide. They play a crucial role in the construction of some of the tallest structures and some smaller two-story houses too. It doesn’t matter the size of the building being built, you will almost certainly see at least some scaffoldings making its way up beside it too.

So, what exact role do they play in all of this? How do they provide assistance and how are they constructed? Well, first of all, it is good to know the history and how they came to be used. The history of scaffoldings is said to date back 17,000 years where there is evidence that these structures were used to help the people of the time paint on the roofs of caves. Historians have found evidence of sockets in walls which would indicate this. The modern type we see today was said to be introduced by two men around the start of the 1900’s who are said to have revolutionised what we see today and brought it in to the modern day.

Now that we are done with the history of scaffoldings, we can take you through their modern day use and the advantages the give to builders.

The first most obvious advantage of constructing scaffoldings is to give height to the work. There are several different types of structures that can do this but with a platform on a support structure it can give a steady platform for the workers to do their job. It can also be built around the house rather than just reaching one specified height which will enable the work to do be done quicker. When finished it can be easily taken down too. 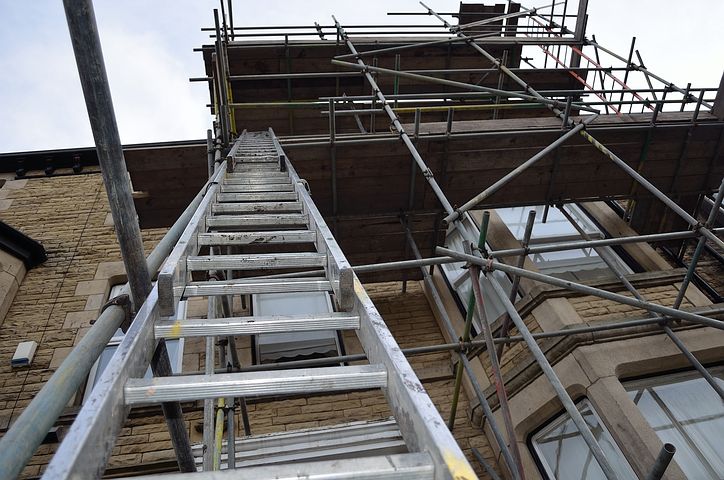 Scaffoldings allow multiple workers to get to the desired height. While it might work for some to use a ladder to reach the second level, they aren’t as steady as building this support structure. They can support multiple workers doing their job at the same time on different sides of the building, something that a ladder cannot do for example. As well as that, it is easy to build them up while not compromising how steady they are. They have been modernised for over a 100 years so they have been built to a tried and tested formula.

One of the main reasons’ scaffoldings are used as opposed to other structures is the amount of safety they provide. They have been in use for so long that as support structures they are nearly faultless at this stage. They allow workers to help construct the building at whatever level without compromising safety. They have a steady platform which allows workers to walk on which is supported by bars of different materials which keeps everything steady. There are also numerous anchor points which adds to the safety of the structure. Moreover, there is also a hand rail available for all workers to hold on to, so they don’t fall off the structure while working.

Scaffoldings have been providing safety for workers for over a hundred years and possibly even way to back to the stone age and it seems that even though technology develops around them they will still be used to keep workers alive hundreds of years into the future and beyond.